Yet another update coming after a very long time since the previous, apologies for that. Well, at least it comes packed with a lot of enhancements from the last months.

Probably the biggest feature of 2022, and the culmination of work that started with viewports a year ago, is the support for custom shaders.

You can now write your own vertex and fragment shaders and assign them to a node. All of that is possible while also retaining the usual automatic batching.

In combination with viewports, it is now possible to create complex scenes, featuring post-processing and modern effects.

Take for example the new apptest_shaders, it shows regular and mesh sprites, all of which use custom shaders, custom vertex attributes, and they preserve automatic batching. You will notice that some sprites are rendered with normal and specular mapping and that the light position can be moved in real-time!

That’s not all, with the ImGui interface or with the keyboard, you can enable a full screen gaussian blur post-processing or a bloom effect. The latter is achieved with a quite complex viewports setup, with off-screen rendering, down-sampling, blurring, up-sampling, and compositing. 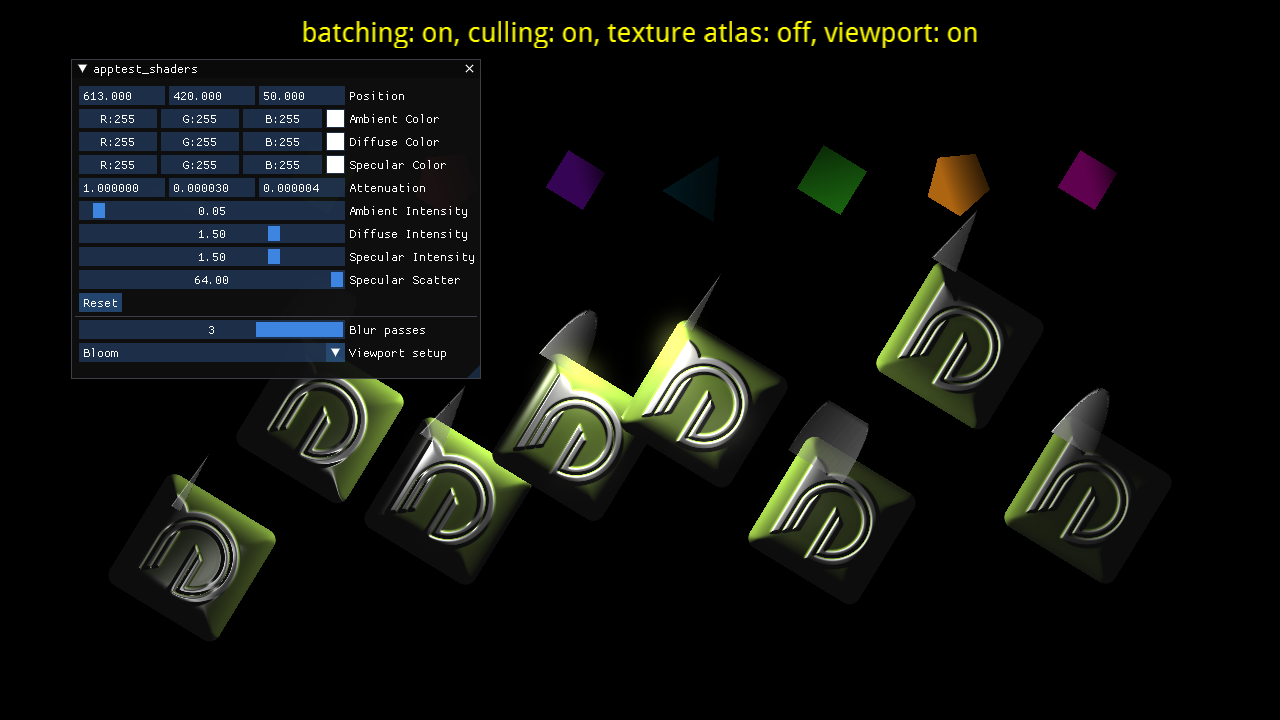 But the road to achieving all that was quite long and required many months. It all started by checking out a very old branch in which I was planning out how to approach the matter in question.

In the first iteration the ShaderState class, the one handling shader uniforms, was embedded inside a DrawableNode. The user could then set a lambda function through the ShaderState object that the parent node would call each time it was going to be rendered.

In the second one, I moved the ShaderState class outside, so that nodes using the default shaders would know nothing about it. To change uniforms you could query the culling state of a node in the onPostUpdate() callback and update their values.

The OpenGL classes have seen upgrades too, for example in the way shaders and shader programs were created and loaded. Shaders are now just another resource, they can be loaded from files or strings multiple times, and if they fail to compile this would only affect the nodes that use them for rendering.

Two other important upgrades were fundamental to support the normal mapping and bloom effects in apptest_shaders: the first is multi-texturing and the other is multiple render targets. The former allows more than one texture to be used as input for a shader, while the latter allows a shader to write on more than one texture.

The GLShaderAttributes class has been deleted and its functionality has been moved inside the GLShaderProgram class. Missing the flexibility of changing the attribute setup per node is not going to affect the rendering at all, while the change simplifies the code of many classes with a possible uplift in performance.

If you run your game with a debug context inside a graphics debugger like RenderDoc, you should see additional information thanks to more glObjectLabel() calls.

Viewports have been upgraded as well. First of all, setting up a chain of viewports for rendering is a lot easier now as you can directly access the Viewport::chain() array instead of using multiple obscure and error-prone calls to setNextViewport(). It is also possible to easily set up cycles for multi-pass rendering techniques.

The second important change, one that simplifies the internals while adding flexibility, is the removal of the texture inside the Viewport class. A Texture object should now be passed to a viewport from outside, a solution that opens a range of possibilities, from sharing a texture between multiple viewports to using the output of one as the input of another.

Those two enhancements are at the base of the blur and bloom setups in apptest_shaders.

There is now a new onResizeWindow() callback that the game can use to know when the window resolution changes. It comes in handy to recreate viewport textures if you have a post-processing setup in place.

The example Lua script has been updated as well to show how you can use viewports and shaders with scripts.

Like many other items on my to-do list, this was something I have been thinking about for some time. Having a string class that does not allocate space for characters should remove the need for a plain old char array while retaining all the useful formatting, appending, and comparing methods of the standard String class.

I have begun to use it in new code and tried to backport in some old cases where it made the most sense. As usual, it comes with a battery of GTest unit tests that should ensure its correct functioning.

Apart from the big viewports API overhaul made in the custom_shaders branch, there were other small issues that I discovered after merging the corresponding branch.

For example, if multiple viewports were rendering the same scene node, its update() method would have been called multiple times.

This is now fixed by using a counter that stores the last frame a node has been updated by any viewport.

I have inverted the position and rotation values used by a camera so that it feels like an object that you can move in the scene. It leaves back the old concept of simulating movement by moving the rest of the world in the opposite direction.

When using the Qt5 backend the viewports were not rendering correctly as Qt5 uses its own framebuffer object to render a QOpenGLWidget off-screen and composite it later.

Rendering order based on node visit

This change brings the nCine closer to the behavior of other frameworks like Godot, Defold, or Cocos.

The user can still affect the drawing order of nodes with layers, but by default, it is dictated by the visiting order of the node in the scenegraph. This change makes the order more reliable, intuitive, and similar to what users are already used to.

This is a very important change for scripters, before this change they might have encountered a crash too frequently while working with user data pointers.

Let’s say you created a nCine object inside a Lua script, like a sprite. The engine would then create a Sprite object and a UserDataWrapper object. The latter would be set to contain the pointer and type of the sprite, added to an array of wrappers, then its pointer returned to the user inside a light userdata.

You could have now used this variable to change the properties of the original sprite that you just created. But if you passed a non-valid wrapper, like one containing the pointer of a recently deleted object, the application would just crash.

This should not be the case anymore: every Lua function that operates on objects like sprites, textures, fonts, particle systems, and so on, will now check if the variable used is valid. There is no wrapper object anymore, the light userdata contains the pointer to the native object and it is checked by accessing a hashmap where the key is the pointer itself and the value is its type.

No more arrays to iterate, if the hashmap does not return a value or if the type is not the expected one, the operation is not carried out and nothing happens!

Updates to the Android building process

It has been quite some time before I had a look at the Android Developers documentation, the Android Gradle plugin, and the rest of the SDK tools.

The build.gradle script has been rewritten to support the latest plugin version. While doing so, all source files have been moved inside an app directory that now represents a separate building module.

A minor Android change is the support of the description attribute in the manifest.

I hope you enjoyed this development update installment and some of the background work around custom shaders.