Quite some time has passed since the previous development update but I’m here again to talk about the latest nCine progress. By the way, in case you missed the latest article, the project has recently reached its tenth anniversary.

Many of the following fixes and features have been driven by the work on some new nCine projects that have seen the light of day during those months:

As I was anticipating in the last update, I pushed the resource system even further by having nodes that can initially be constructed without any resource assigned to them.

Think for example of a bunch of sprites in an array that are constructed via their default constructor. They will have no texture or parent but they can still have a color. Solid color sprites will use a specific shader that doesn’t sample any textures at all. They will be batched together and render faster than regular textured sprites.

This functionality has been extended to audio buffer players as well, they can be default constructed as well.

You can of course assign a resource to a default constructed node at a later time.

This feature was requested by Fahien while he was working on ncJump and I couldn’t help but satisfy the user working on the most ambitious project.

So not only I added this feature but I fixed the lack of a console window on Windows, an issue plaguing this platform since I changed the default subsystem.

Now we can have the windows subsystem and the WinMain function, and open a console if the user wants it or if we are running a debug build. This is possible by using the AttachConsole API function.

As a plus, I have ported from ncline the code to set the ENABLE_VIRTUAL_TERMINAL_PROCESSING and have color output in the Windows command prompt.

The most important new feature of this update is probably the new way of running Lua scripts. In the past, an error in a Lua script caused an assertion that killed the application. This is, of course, not acceptable. Users should be able to safely play with scripts, either in games or tools. For example, writing scripted animations in SpookyGhost.

The main change was to replace each lua_call() with lua_pcall(). The latter works in protected mode and returns an error in case the script is malfunctioning.

The error message is optionally returned to the application with additional information extracted from a lua_Debug structure. The user can use it to show where the error is in the script source.

I have also removed all occurrences of luaL_argerror() and replaced them with simple warning messages to avoid any exit caused by this kind of error.

To give the user even more flexibility I made it possible to load a script without running it immediately: loading a Lua “chunk” and calling it are now two separate actions.

As a bonus, I also fixed the parameter order of all calls to lua_createtable().

Reacting only to keypresses is not enough in the world of Unicode and UTF8, as text characters are not the same as pressed keys. For this reason, I have exposed to the user a new input event that should make it easier to process text: onTextInput().

SDL2 already came with an SDL_TEXTINPUT event and GLFW with a CharCallback. They work slightly differently but wrapping them was easy enough.

For Qt5 I check the length of the string returned by QKeyEvent::text() and generate the event if it’s longer than zero. It means that this particular key event is the last in a Unicode codepoint sequence.

The Android implementation is probably the weaker one as KeyEvent::getUnicodeChar() does not seem to support codepoint sequences of more than one key.

I have added an onQuitRequest() input event that makes it possible to override a quit request coming from the system.

Think about pressing the window close button or using the contextual menu from the taskbar to perform the same action. In those cases, the new event gets called and the user has a chance to save the game or to display a dialog window. The latter is what happens with SpookyGhost now.

The new onPostUpdate() application event solves an old problem: being able to know the absolute transformation of a node before it gets rendered.

It gives a new meaning to query methods like SceneNode::absPosition() as it can now be called after all nodes have been transformed so you don’t get stale data from the last frame. I have also added a SceneNode::setWorldMatrix() method to further modify the transformation before rendering.

This change, together with a fix that caused an additional frame delay when rendering ImGui or Nuklear in presence of a scenegraph, made the overlay in ncTiledViewer perfectly synchronized with the movements of the underlying map. 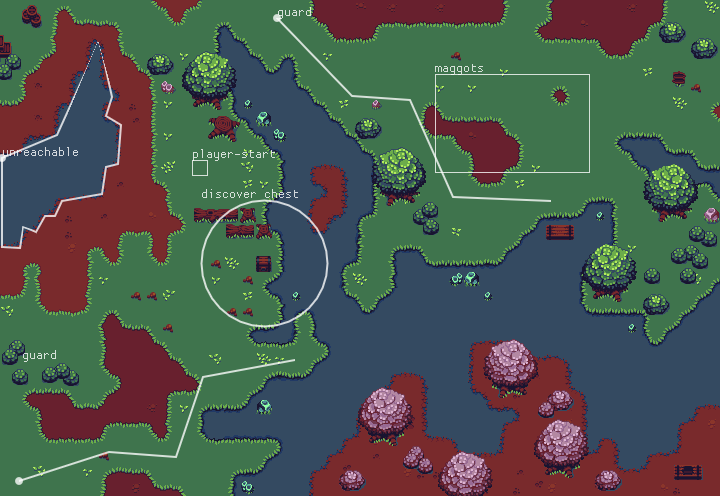 String capacity is another quite annoying issue that I have been willing to address for a long time. In the early days of nCine, I opted for fixed strings, you decided the capacity at construction time and the object allocated a buffer only once.

Great for performance, right? Possibly, but also a great source for bugs all around the place, with truncations happening when you least expect them.

I decided to change the default behavior: now strings reallocate if they need more space. You can keep appending text and the string object will make sure a truncation never happens. Of course, the user can still choose the old fixed behavior if needed.

This feature will make the Savefile Size configuration entry in SpookyGhost obsolete. The program will not need to preallocate a big enough string to contain the project file.

I hope the article was worth your wait and you enjoyed the new features.