It has been a month and a half of small but useful updates for the nCine.

The PNG image loader has been modified to support more color types, by copying some code from the libpng example. It means that any nCine game is now able to properly load PNG images with palette or with gray-alpha channels and to expand or strip bit depths that are different than the standard 8 bits.

I have also sucessfully converted the ncPong test game to a Lua script and fixed a lot of Lua bindings bugs in the making.

Things like missing methods or constants that were never exported to the Lua API.

Another small change that improves the quality of life of a game developer using the nCine is the moving of headers inside an ncine subdirectory. It is now very clear when you are using your game headers or the engine ones, as you would now see something in the likes of:

Using the angle brackets makes it also easier to spot them, and they made their way into the included examples as well.

Next is symbol stripping from binaries, a way to reduce the size of Android libraries on all supported platforms. It is also a way to strip the base libraries on ArchLinux as the makepkg stripping option is not cross-compiler aware and it ends up stripping Android ARM libraries with the x86_64 strip command, ruining their content.

I have decided to finally spend some time identifying and squashing a long standing bug introduced with the latest renderer revamp that would cause a one frame delay when committing uniform variables. The result was very noticeable when disabling, moving and later re-enabling drawable nodes: they would be rendered in the old position for only one frame causing a very annoying graphical glitch.

At the same time I also fixed another small graphics bug that would treat 3 channels textures as gray and render them with the wrong shader. It was evident in the texture formats example test, as it would render RGB textures in gray shades.

The next change is all dedicated to joystick hats, the work was in stand-by as I was waiting for the release of GLFW 3.3. Now hats are completely separated from buttons (on GLFW with glfwInitHint(GLFW_JOYSTICK_HAT_BUTTONS, GLFW_FALSE)) and queried on their own on all three backends: GLFW, SDL2 and Android. When talking about joysticks one should expect the usual magic involving bit masks when working on Android, in this case to make both AINPUT_EVENT_TYPE_KEY and AINPUT_EVENT_TYPE_MOTION events update the hat state, as some joystick report one or the other type of event (see also the official Android developer article about processing directional pad input).

This change made it also possible to add the directional pad as a set of buttons when using the gamepad mapping, finally bringing it on par with the original functionality in SDL2.

After some feedback by one tester I decided to rename the application pause related methods to suspension, a word that makes it clear that in-game pause has nothing to do with global event suspension at the application level.

As a bonus I have also introduced a flag that the user can set to disable the automatic suspension that happens when the focus is lost.

Another small quality of life change is the removal of all the getter and setter methods from the application configuration class. Now the user can just set a value in the configuration structure, similarly to what was already happening when changing the configuration in Lua.

I finally decided to commit myself to a code beautifier and stick with it. After years of playing with Artistic Style and Uncrustify without ever fully liking the results, I decided to put together a .clang-format configuration file.

Maybe I’m getting old and tired or maybe I’m just less scared by the stylistic compromises but I should admit I’m pretty satisfied with it. The only exception being the IndentPPDirectives option: I would really like to be able to use BeforeHash instead of manually edit the results given by AfterHash, but it seems I will have to wait for the Clang 9 release.

The nCine Template Library has been given some care too, with the addition of some containers and many new unit tests (now more than 1000!

) and microbenchmarks. Most containers have seen the addition of an emplace method that uses placement new.

I have also added set containers, some are based on the hashmap ones stripped of the value associated to the key but there is also a new sparse set container that should be very fast when storing numbers and when the space-time tradeoff is advantageous.

Next we are back with graphics, with the in-application integration of RenderDoc. This means that the user can now trigger a capture, launch the Qt interface when running under renderdoccmd, disable the overlay, provide comments for a capture, set the file path template for saving and more. 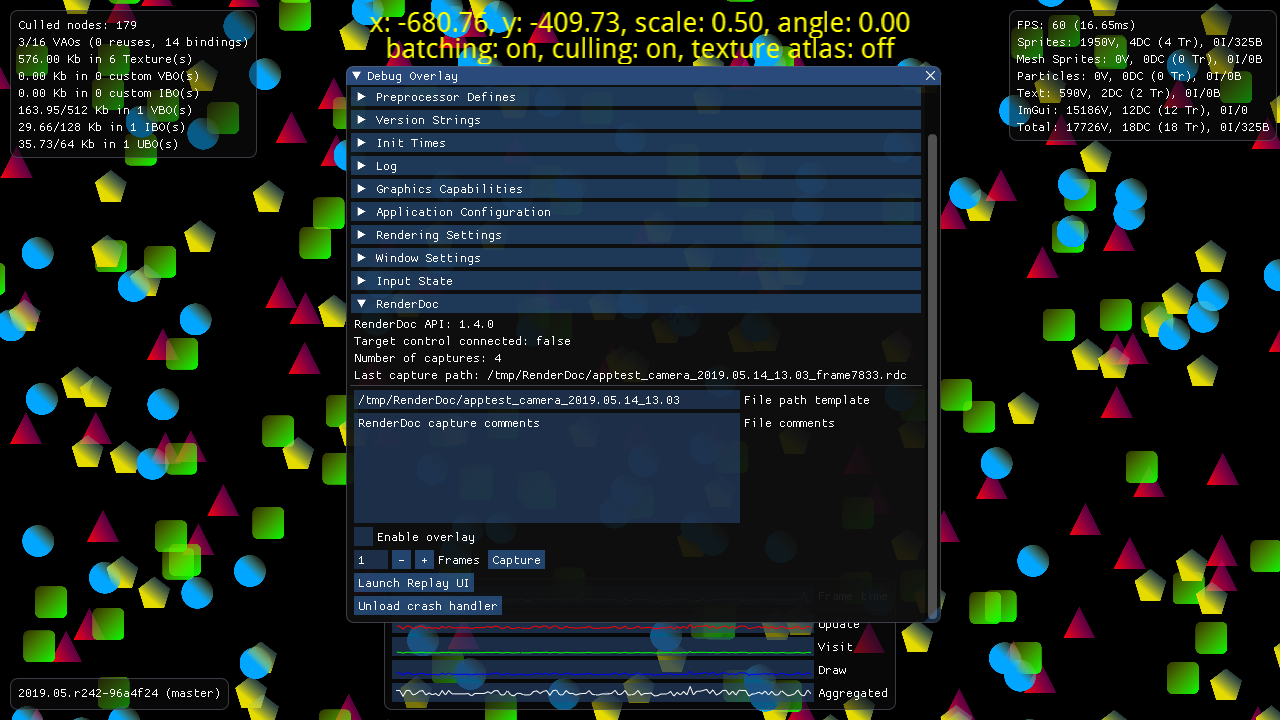 The last change I’m going to cover in this update is another long standing graphics issue that seems to only manifest itself on Windows 10 and Intel GPUs. There are some reproducible cases when the driver would end up displaying the first frame and doing nothing more, while the application continues to run and process events. The error does not occur when running the tests under apitrace, RenderDoc or Intel GPA, making it harder to examine.

I have discovered that the problem is related to mapping and unmapping of uniform buffer objects and my solution so far has been to disable the feature altogether while providing an option for the user to enable it again.

When mapping is not available the renderer falls back to using a single per-frame call to glBufferSubData() followed by buffer orphaning, resulting in comparable performances in many situations.

And that’s the end of another pretty long and detailed update, I hope you enjoyed it!